China’s measures to tighten regulation on the imports of waste materials for recycling have been highlighted by Chinese news agency, Xinhua.

Both foreign waste and the country’s own schemes to encourage recycling featured on the Chinese Ministry of Environmental Protection’s website today (2 January). 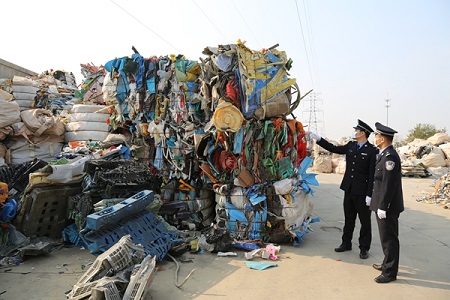 Solid waste seizure made by Dalian Customs in China

China’s State Council has also detailed rules for the enforcement of an environment protection tax law within China, which took effect on Jan 1, 2018.

Under the new law, which targets enterprises and public institutions that discharge listed pollutants directly into the environment, companies will pay taxes for producing noise, air and water pollutants as well as solid waste.

Tackling pollution has been listed as one of “the three tough battles” for China in the next three years, according to the Central Economic Work Conference earlier this month.

In July, noted the Xinhua agency, China issued a plan for banning “foreign garbage”. According to the plan, China will ban imports of 24 types of solid waste, including plastic waste, unsorted paper waste, and crude textile waste by the end of 2017.

Xinhua said: “Importing garbage that can be replaced by domestic resources will be phased out by the end of 2019. The types and amount of garbage imports will be cut down steadily.”

According to Guo Jing, chief of the International Department at China’s Ministry of Environmental Protection, “imported garbage” played a part in making up for a domestic shortage of resources in the past, but as the economy and society have developed, the drawbacks of this practice have emerged, including environmental pollution and health threats.

And, Xinhua said despite the strict control, some companies still take risks to make profits by importing foreign garbage illegally.

From February to December, it is reported that customs across China filed 298 criminal cases against garbage smuggling, investigated and verified 866,800 tons of garbage involved, and detained 421 suspects.

Meanwhile, alongside proposals to restrict imports, China has been incentivising its residential communities to sort their recycling and waste separately.

In March, China issued a plan requiring 46 cities to carry out mandatory garbage sorting by the end of 2020. Under the plan, all public institutions and companies are required to separate hazardous waste, kitchen waste and recyclable materials.

According to Xinhua, by the end of November, 12 cities had adopted laws and regulations on garbage sorting, while 24 had introduced work programs related to the issue.

Beijing’s Tongzhou district has implemented mandatory garbage sorting in public institutions and more than 2,500 restaurants. The restaurants are supposed to separate kitchen waste into a bin.

“A napkin, a chopstick, even a toothpick cannot be mixed into the kitchen waste,” a restaurant employee said. “If the recyclers find other garbage included, we may be fined or punished.”

Xinhua said although the mandatory sorting has mainly been adopted by public institutions, residential communities are also encouraged to follow suit. Some incentives have been used to increase participation by residents.

By the end of October, more than 4 million households in Shanghai had registered to receive reward credits if they throw away garbage in line with recycling requirements. The credits can be used to buy daily necessities.

And, in Taiyuan in Shanxi province, intelligent waste recycling bins have been introduced. After packaging recyclable garbage such as plastic bottles and waste paperboard, residents can paste bar codes on it and throw it into the bin to earn points for corresponding items.