A study for Europe’s aluminium can recycling organisation has found that there is a need to improve can recycling rates in south-eastern European countries such as Romania, Greece and Hungary.

The research was carried out by the Institute of Waste Management at BOKU University in Vienna, Austria.

The academics found that considerable amounts of used aluminium (US known as aluminum) beverage cans are collected by waste-pickers, particularly in South-Eastern European countries like Romania, Greece and Hungary. The study estimates that each “individual informal collector” amassed an average of 1.6 kg of used beverage cans per day.

Commenting on the research, Raphael Thevenin, Chair of the European Aluminium trade association’s Packaging Group said, “Formally counting cans that are already collected informally is an easy way to boost official recycling rates. Not only that, but it will more accurately reflect the true recycling practices of each country.” 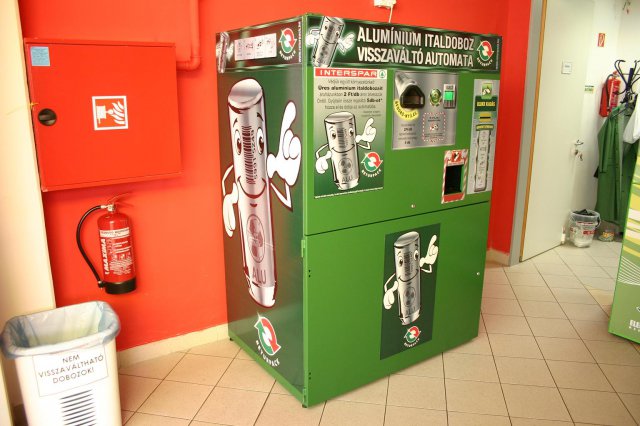 One of the early Returpack reverse vending machines in Hungary (picture: Returpack)

The Association remarked that “One tried and true method is the widespread installation of Voluntary Take-Back Machines. By placing close to 200 machines in strategic locations such as supermarkets, in just five years the Hungarian Returpack system captured 15-20% of the country’s total market for used beverage cans, representing 58% of all informally collected cans. Similar machines were recently installed in Romania. Collection machines ensure fair payment in exchange for the raw material. They also have the added benefit of inciting behaviour change by involving consumers in the act of recycling.”

However, the study found that the use of the machines alone will not be enough to increase can recycling. It argued that Extended Producer Responsibility (EPR) collection schemes continue to play an important role in “formalising the informal. EPR schemes are particularly effective when suited to the unique needs of the countries where they operate. According to the study, existing schemes can nevertheless be improved: better designed bins can help combat the theft of valuable aluminium packaging scrap.”

What is Extended Producer Responsibility (EPR)? EPR is a policy approach under which producers are given a significant responsibility – financial and/or physical – for the treatment or disposal of post-consumer products. (source: OECD)

Additional support is needed, said the Mr Thevenin. He noted: “The European aluminium industry is committed to recycling. As a permanent material, aluminium is a key contributor to the circular economy. But as this study shows, additional investment and effort is needed to ensure valuable scrap like aluminium beverage cans stay in the official recycling loop,” said Mr Thevenin.

The study was conducted in light of the recycling targets for aluminium packaging proposed in the European Commission’s Circular Economy package. Recycling rates for aluminium beverage cans in Europe are already above 70%, but the industry is ambitious. While the EU is discussing a target of 75% by 2025, European Aluminium’s members are aiming to reach 80% by 2020.